Lil Nas X gave the world his new song ‘Montero (Call Me By Your Name)’ last week but it was its music video that had people talking. The singer plays with religion a lot in the elaborate visual – which ultimately ends with him giving Satan a lap dance in hell and then killing him.

Both conservative and otherwise non-conservative voices on Twitter displayed disappointment and dismay against the singer for this new release. The timing doesn’t seem to be a coincidence either as the song dropped right in the beginnings of holy week.

People on Twitter denounced the music video – many calling it highly inappropriate for children. Lil Nas X’s only hit ‘Old Town Road’ was big among that demographic. The satanic imagery was not well-received by most parents.

Even Fox News joined in on the backlash, which Lil Nas X saw as a positive.

there was no system involved. i made the decision to create the music video. i am an adult. i am not gonna spend my entire career trying to cater to your children. that is your job. https://t.co/SzjjYe2tf4

Things didn’t stop there as Lil Nas X promoted new shoes that have brought on a whole new wave of problems for the rapper. The shoes feature a bronze pentagram, an inverted cross and a drop of real human blood and … the Nike logo – which Nike didn’t take to kindly. 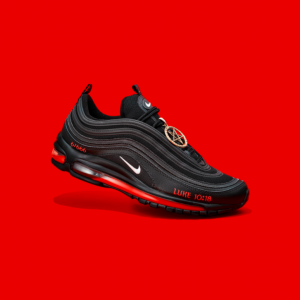 Nike is now suing the company behind the shoes – MSCHF Product Studio – for these customized Nike Air Max 97s. Only 666 pairs of the shoes were made and sold out in less than 1 minute. They were going for $1,018 which references Luke 10:18 – the expulsion of Lucifer from Heaven. Nike usually works with this company by providing shoes to them before they are worked on by the artists aligned with MSCHF. However, they want none of this and want to make it clear that they had no say in the customization of this shoe.

After many began attacking Nike too, the company released the following statement to NBC News: ‘We do not have a relationship with Little Nas X or MSCHF. Nike did not design or release these shoes and we do not endorse them.’

Lil Nas X hasn’t commented on the lawsuit except by continuing to troll everyone on Twitter.

me at nike headquarters tomorrow pic.twitter.com/iAAdjc8Ele

One thing remains certain – he got people talking. Whether you love or hate the song, the music video, and the shoes, this single rollout – which apparently took him 9 months to make happen – has been successful. The video has already amassed over 2 million views on YouTube and the entire press is covering the whole thing.

Not leaving any opportunity behind, Lil Nas X also recently tweeted that his debut album Montero will be out this summer.